skip to main | skip to sidebar

pass me a smile Exhibition work2 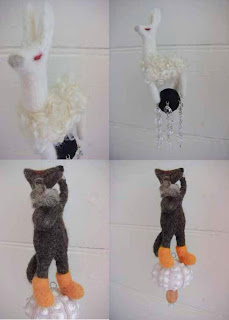 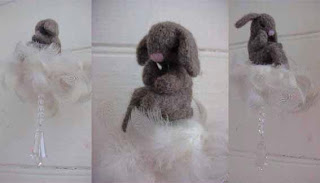 Thank you who spend the time to see my work.
I wish some good things happen to you today.
Have a nice week end...
Posted by toyoko sugiwaka at 13:41 No comments:

pass me a smile light box

I like this light box.
These photos took in my bed room and kitchen.
Posted by toyoko sugiwaka at 15:12 No comments:

pass me a smile: creatures of peace and calm work 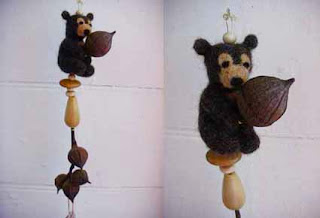 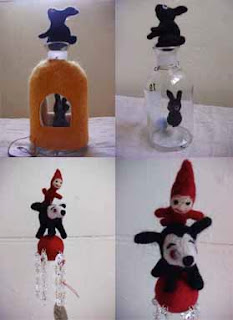 I photograph a lot today.
Posted by toyoko sugiwaka at 13:19 1 comment:

pass me a smile: creatures of peace and calm 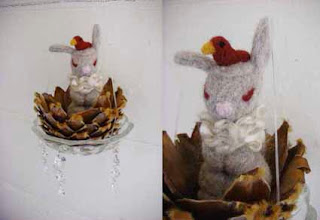 I am going to show you one by one from my past Exhibition Pass me a smile creatures of peace and calm.
introvert rabbit with her Protection soul on the head.
hanging object A$160
Posted by toyoko sugiwaka at 10:12 No comments:

pass me a smile: creatures of peace and calm 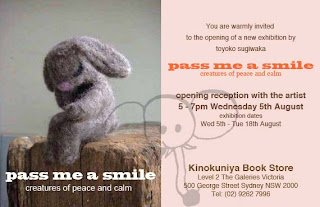 From 5th of August I will have an exhibition at kinokuniya book store gallery in sydney.
There are 16 animals from pass me a smile and I cerate new animals too.

Toyoko Sugiwaka is a Sydney based Japanese artist and graphic designer. In her latest book pass me a smile, published in April 2009 by Murdoch Books, Toyoko made 16 creatures with felting, embroidery, crochet and fabric painting techniques. With the step-by-step photographs and instructions, the book is designed to make your own special creature with a feeling of warmheartedness - this will surely make you smile. And that smile will be passed onto your special 'someone'.

In this exhibition pass me a smile: creatures of peace and calm, Toyoko exhibits these 16 little wonders with some additional works. For Toyoko craft making is a reflection of her spiritual journey. “With hand made felt combined with embroidery and crochet you can virtually make any shape. So often my heart, ‘kokoro’, takes shape into my creatures”, she says.

Toyoko was born in Osaka, Japan. As a small girl she and her sister learned craft techniques from her aunt, a skilled expert in crochet. She studied graphic design at the Osaka College of Design. Whilst keeping her day job at a design studio, she began making various artworks. In 1993 Toyoko had her first exhibition at Gallery T.K.Art in Osaka. Later in the year she moved to Sydney to work as the art director for a printing company before going freelance as a graphic designer.

In 2001 Toyoko received training in felting techniques from internationally renowned South Australian artist, felter and dyer India Flint. At India's beautiful farm Toyoko discovered a life of her dream living with many animals. She was so impressed by India's large-hearted human nature that she wanted to share her experience in craft making with other people. With India Toyoko co-wrote her first book, Handmade Style: Felt for Murdoch Books in 2007.

Toyoko draws her inspirations from every little, good thing in her daily life. Her life in Sydney's Balmain East with her cat Keats and her exquisite artworks were featured in two Japanese mooks, "World Dog and Cat Interior" and "Lovely Kitchenware" by Tokyo publisher X-Knowledge. Her artwork was also handpicked by a leading stylist to be featured in the popular "an an" magazine published by Magazine House in Japan.

Toyoko admits that discovery of her artistic talent was somewhat a result of misfortune. "While working as a graphic designer in Osaka, I lost the photograph leased from a famous Japanese photographer Sakae Takahashi whom I respected very much but found hard to work with. Making an apology for the loss, I created the brass wire object of him with a cat. He seemed to be impressed. That moment I vaguely felt that my creature may have touched his heart. This feeling became the basis of my work."